FRIDAY FAIR - WE'VE GOT IT IN HAND

The way the priest holds his hands is not incidental. The hands of the priest are held in a certain fashion, some prescribed some by tradition, because of the Church’s symbolic code which should be easily read by any Catholic in any parish in the world.

Some are neither prescribed nor enforced but have value in them though a priest could ignore them completely and it not effect the Mass whatsoever. For example, have you ever considered where the practice of placing one’s hands palm to palm in prayer comes from? In ancient times someone who pledged service to their lord would place their hands thusly into the hands of their superior. This is a vulnerable position and a symbol of service and humility. This is the very act that occurs in t

he ordination right as a man kneels before his bishop and promises obedience to him and his successors. When we pray we often adopt this position of hands perhaps not even realizing that we are indeed symbolically placing ourselves thusly into the hands of our Master and Lord and trusting Him to care for us even as we defend His Name here on earth.

Other positions of the hands are indeed prescribed. A flat hand with the palm facing the desired target is used for calling down a blessing. So, for example, when a priest is ordained we have the laying on of hands, at the epiclesis (calling down of the Holy Spirit upon the bread and wine at Mass) the flat hand is used, or the laying on of hands at the anointing of the sick. 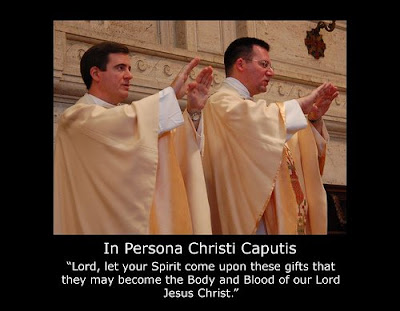 Another hand gesture is indicative. It is the blade of the hand that faces the target of the imparted blessing. At the end of Mass when the Sign of the Cross is passed over the assemblage or when the Cross is made over the gifts, it is this indicative mode that is used.

Ear Father, Thank you for explaining the origin of praying with the hans together...quite a meditation in this simple gesture.

Could you explain the orans position of the hands? (I think it is called that: when the priest raises both hands, palms outward). Or is that for next week?

"Indicative" hand gestures remind me of my Latin classes. It looks like the Church has a "sign language" with a grammar all its own! All the more reason to be grammatically correct at all times . . .