This week’s title is Queen of bishops. The first of the two selected to represent all bishops is Saint Hillary. Not only was he the patron saint of Monsignor Hillary Zwisler the founding pastor of the parish, Saint Hillary is also the name of the daughter parish of Saint Sebastian. 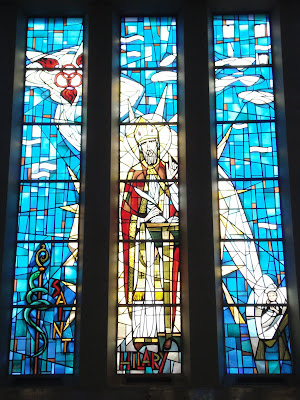 St. Hillary was born into a noble family. A pagan, he was eventually baptized and finally became bishop of Arles, hence the miter that he wears and the crosier or bishop’s staff to his side. The Church was going through some persecution at the time and perhaps that is the meaning of the snake wrapped around his crosier. I can find no other explanation in my books. If you have more insight it would be appreciated. Because of this persecution he wrote his first of many books entitled, “First Book to Constantius” begging him to restore peace to the Church. He went on to write quite extensively (he is a doctor of the Church) such as his most important work, “De Trinitate”, explaining the symbol for the Trinity in the upper left hand corner the aura of which which flows down to the book and pen with which he writes.

In the lower left hand corner is a child. My first reaction is that this is not the Christ child because of the distinct lack of a halo, yet alone Christ’s special halo which this artist does employ elsewhere. One of my symbolism books says that he is sometimes pictured with a child, “sometimes in a cradle at his feet, raised to life by him.” It fails to explain any further. He was married and had a daughter when he was elected bishop. Some will attribute this baby as the Christ child and is thus a reference to his treatise on the nature of Christ. Once again, I cannot say. If you have reference to show who this child is more definitively it would be appreciated. 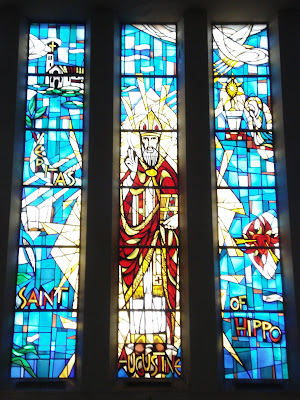 From the Saint Sebastian Parish Directory, “St. Augustine was the fifth century Bishop of Hippo and many regard him as the greatest Christian writer. His mother, St. Monica, is shown praying for his conversion, and he was finally baptized by Saint Ambrose. The church represents his labors on behalf of God’s people. Veritas refers to the truth of God’s word. The book and quill symbolize his writings. The heart reflects his deep burning love for God and willingness to suffer in serving Christ.”
Posted by Fr. V at 9:25:00 AM

Good to read this.

The snake reminded me of the bronze seprent from Numbers 21:9, and the connection is relevant. According to the saints database at Catholic Online, St. Hillary is the patron against snake bites. I'm still trying to find out why.