Representing the apostles are Saint Peter and Saint Paul who are standing guard and watching over us about half way down the nave. Being that this is the year of Saint Paul let us begin with him. 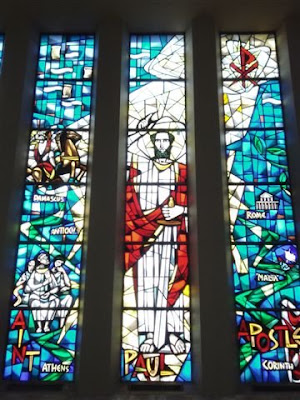 Notice that Paul wear red, a color that informs us that he was a martyr. The sword that he holds is the instrument of his martyrdom for legend tells us that he was beheaded. Notice his deep gaze and upraised hand as though he were giving a thunderous sermon on behalf of Jesus. It is one of (the very few) regrets that I have about being ordained - that the reading of his letters is no longer my role in the liturgy. They are so fiery and full of passion. It is sometimes difficult to listen to people read him sweetly and gently.

At the upper right hand corner is the "chi rho" reported here earlier. It is the monogram of Christ and the yellow glass shows Christ's anointing falling on Paul and guiding his ministry directly.

To the left we see the story of his conversion in Damascus where he was "knocked off his high horse." Here is another example of tradition working in our lives. The Scriptures do not mention a horse at all yet (Acts 9:4) we all know the story and the saying. The ribbon extending from this scene scrolls around the rest of the picture marking the other cities through which Paul traveled and the people he met while spreading the Good News. The objects in the upper left hand corner are scrolls representing the letters Paul wrote. 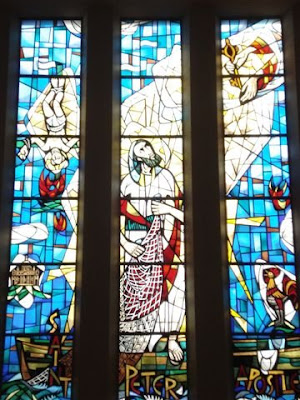 Saint Peter's window is anchored around a portrayal of him as a "Fisher of Men." The net also calls to mind the encounters he had with Jesus when he was instructed to cast the net over the other side of the boat. As with Saint Paul, notice the yellow glass cascading down from the hands extending from the heavens (God) holding the keys to the kingdom. Peter also stands in a boat which is often called "the Bark of Peter." The bark mean boat and the boat is the Church which he led and is thus recognized by the Universal Church as the first pope.

At lower right is the rooster which Jesus predicted would crow after Peter had denied him three times. The upper left corner shows Peter's crucifixion. Not feeling worthy to be crucified in the same manner as Our Lord, he requested to be crucified upside down. When you see an upside down cross then it may mean no disrespect but may be the symbol of Saint Peter.

Just below this and a bit difficult to see in this picture is a depiction of Saint Peter Basilica in Rome. It was over his grave that the great Saint Peter's was built, the altar being located directly over his grave.
Posted by Fr. V at 6:01:00 AM

Dear Father, Could these explanations be put into print form, to make them accessible in some way to parishioners and visitors?