MAKING A MOLEHILL OUT OF MOUNTAIN

“Nothing is great or small except in comparison.” This almost quote (it is pretty darn close) is from Gulliver’s Travels, the story of the man who ends up being tied up by “tiny people who see him as a giant, but who sees himself as of moderate stature and looks at these others as abnormally small.

About ten years ago I traveled to Binga, Zimbabwe with Catholic Relief Services to see what kind of work we were doing over there. There were a few voices that angrily cried out, “Why are you going all the way over there when there are people here without food in their refrigerator?!” But the poverty we were to experience there was nothing like what we call poverty here. There were no refrigerators. There would be no place to put a refrigerator if they had one. And if they miraculously had the space and a refrigerator, there was no electricity. There was no plant to make the electricity to get to the places where there might some day be a refrigerator to plug into the system. Looking every direction there was nothing. Maybe a broken down school bus that would not even be allowed on the road in the U.S. would come by offering public transportation now and then, maybe not. Or your return trip may be late at night dropping you off *somewhere* and there would not be so much as a night light to guide you to your hut. These are people who look at poverty in the U.S. as a major – MAJOR – step up. “Nothing is great or small . . .”

Something similar to that is happening to me this week. The rectory in which I live is fabulous in many ways, 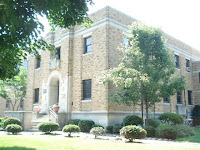 but there is no living room. Because of a lack of space the living room was turned into the pastor’s office (administrator). This makes it difficult to have anyone over to visit who is not a priest or family member, people you can take to your room. If somebody comes by for a friendly visit it entails sitting around my desk or at the dinning room table. (Yes, I hear the tiny violins in the background.) So I’ve decided to turn half of my office back into living room, desk at one end, comfortable chairs at the other. It is being done well, somewhat modestly, but not out of keeping with the city in which I live.

But there will be a house guest this week. He is a priest in a diocese with people who are as poor as the people of Binga mentioned above. I was thinking that I did not have the righ

t chair for guests in the living room and he is sorry that he does not have a chair to sit in. The change over of the office will happen in the middle of his visit. It is a prick of the conscience. I don’t know that it would call me to give the project up if I were aware how this would all pan out, but it does remind me that I need to be charitable and at least keep in mind that when I am doing “without”, most of the people who live in the world today or the majority of humanity who ever lived on the face of the earth would be ecstatic with the abundance of my “with.”
Posted by Fr. V at 8:28:00 AM

Interesting that you would bring this up today. Last night I heard a speaker discussing a trip to Africa through an organization in which she sponsors 2 children. They live in 8 foot square huts, are joyful for a piece of tin to put on their roof to shuttle fresh water into a bucket when it rains. They literally slay the fatted calf for their guests in thanksgiving, and are insulted if their guests don't eat. (The guests, of course, being Americans or others who "have" and see the poverty of the people).

I had my own prick of conscience last night. While I lament how I can barely pay my bills, I know that in the eyes of the world I'm incredibly wealthy as I have a 900 something square foot townhome (small by most standards), I have enough to eat, I own a car, I have an education, a job, etc. I have MORE than abundant wealth in comparison to the vast majority of the world.

And yes, it DOES want to make me get rid of it all so as to beneift others.

Even in this economic crisis we're facing, NONE of us has a right to complain. Thanks for the second kick in the head in as many days!

Dear Father, Our visiting priest from Nigeria, Fr. Chima, used to say that in this country we have "the privileged poor." He had personal knowledge of the very conditions you saw on your CRS trip.

I think at your parish you're dealing not only with the floorplan but with a run-away culture of entitlement on the part of employees and others who have previously been permitted to make themselves at home in private areas of the house (e.g., kitchen) at all hours. The problem is more than brick, mortar, lumber and plaster; it is a mentality that the house should be "open," and the priests do not deserve the same degree of privacy as other employees would expect at their own homes.

Fr. V.. are you sure you want to stay in the States?