TUESDAY QUOTE OF THE WEEK LXXXIIII

FINDING TRUTH WHEREVER IT MAY BE FOUND: "If you want to know what is holy in this world, all you have to do is look at what is violently profaned." Christopher West.

QUOTE II: "When you are not having sex within the essential union of yourself, your husband, and God, you're really only having sex with yourself." from Dawn Eden's "The Thrill of the Chaste"

"Faith is not a dirty word. And hope is not for fools. I used to make fun of optimists. But if all we have are negative world views, we're in trouble." Robert Downey Jr. (That one is for you CP)

"Pastors plan to speak this weekend in favor of McCain. That should get the IRS' attention." Nikki sent this article in from the LA Times and is looking for your comments.

The Diocese of Cleveland Enewsletter asks if you are confused about what exactly is at issue with same sex marriage. Here is a short and easy to understand statement. Though it certainly does not cover all of the issues it does make some of the Catholic whys and wherefores easier to understand.

Would a Tuesday be complete without an announcement from Jay stating that Catholic Carnival 191 us up and awaiting for your perusal?

Mike sent along this site called CatholicPreaching.com chronicling one priest's preaching from ordination to the present. "There's no such thing as stealing in comedy and preaching."

Societas Verbi Divini provides some online games that they promise are safe for a Catholic site to promote (though they may still waste too much of your time.) WARNING: ADDICTION LEVEL LOW.

Those accustomed to snooping out bell towers ask if it is not rather disgusting up in the bell tower visited and reported here a number of times. Actually not at all - an unusual state of affairs for bell towers that are not otherwise completely caged in. The reason we are so blessed is because of my friend here, the hawk, spotted surveying his territory one morning. 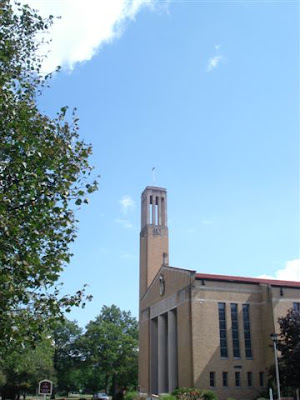 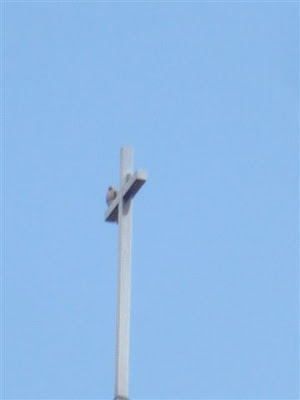 You know...that DOES explain a LOT!

Catholicpreaching.com is astounding. Fr. Landry blows me away! I used one of his homilies as the basis for that RCIA talk you had me do. This guy’s got clarity, charity, and guts!