AND HE IS WILLING TO CHANGE HIS NAME TO GEARINGSKI

There was actually supposed to be another post today that did not quite work out yet so I though I would share with you a little of what I did yesterday. One of my best priest friends, Fr. Barry Gearing, was enjoying his second day as administrator of Saint Adelbert in Berea, Ohio. So I went t pay him a call. This a great Romanesque building just off the campus of Baldwin Wallace College. Here is an exterior shot of the building. 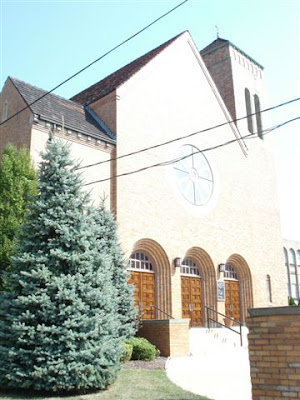 The place has been virtually untouched. Over the side altars there used to be white crosses outlined in gold but when they put air conditioning in they blew over and so they took them down. 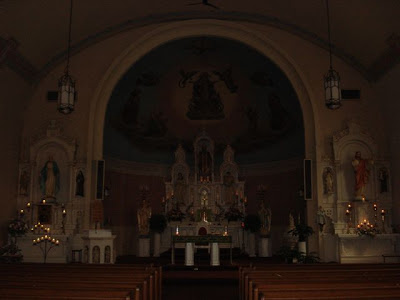 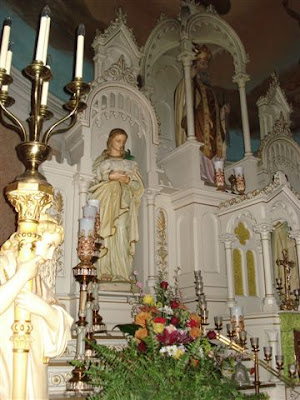 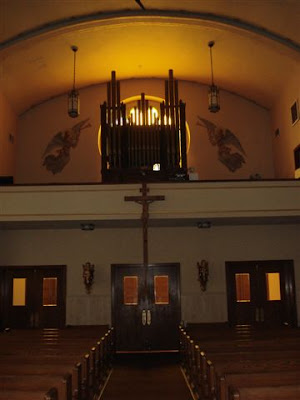 I used to work at BW and would play this great little tracker action organ for the pastor, Fr. Keller, in the mornings. One day he called me up on intercom and asked me to come to the sacristy after Mass. He wanted to inquire if I ever thought about the priesthood and I said, "Yes, but I want to pay off my student loans first." "Nonsense!" he fired back and immediately set out plans to get me to my interview at Saint Mary Seminary which was then on Ansel Road. 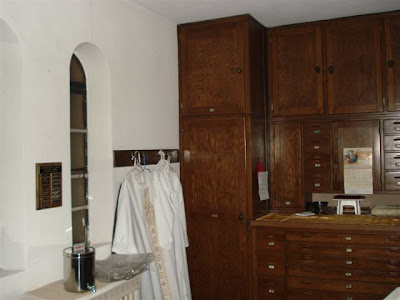 Above is the small but serviceable sacristy in which Fr. Keller proposed the idea of the priesthood. Below is their relatively new adoration chapel using the altar from the convent that was torn down. The statue in the middle is St. Padre Pio. 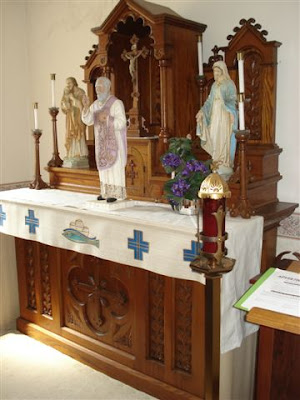 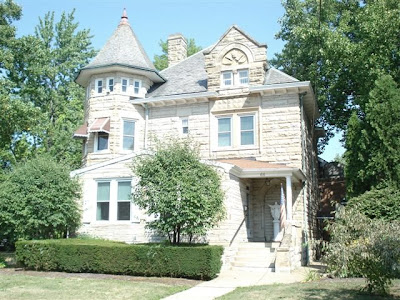 Ahhhh! The beautiful Victorian rectory (not that these things matter - and yet they do) made from true Berea sandstone. Over the top window you will see carved in stone two flags, one is Polish, the other I forget - perhaps American, topped off with the papal tierra. Below, Fr. B with is leg in an immobilizer due to a particularly bad golfing accident (?!) frets over moving while still on crutches. Poor guy! 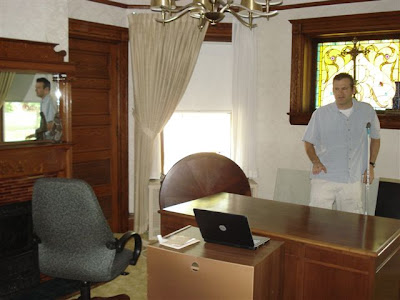 Father, Lovely photos. Thank you for sharing this beautiful church with us. Maybe those of us who love beauty will be motivated to visit. May the Lord strengthen Fr. Gearing for his new ministry.

Unfortunately, student loans and other bills must come first before inquiring about entering religious life. Guess it's one of the perks of Priesthood vs. religious life.

The need to first pay off student loans is a difference between religious life (male or female) and the diocesan priesthood, because diocesan priests don't take a vow of poverty. Ordered priests too must pay off loans before entering.

anon ~ INQUIRIES can be made before debt is paid off. There's no problem seeking religious life while carrying, say, 80,000 in debt. However, you're right; before entrance the debt has to be gone.

Fr. V. ~ What an awesomely beautiful church! (Hey! If I come back to Cleveland can I tour THAT one too? lol)

Berea is a wonderfully historic Ohio town. I'm very happy for Barry. The quarries, the railroad, the university, the metropark, and so many other things make Berea a fantastic place. The people of that parish are great . . . the Polish heritage so beautful. Still so many young people. A true gem of the diocese! What a happy time for everyone. (Plus the county fair ground right down the street!

I noticed St. Padre Pio is wearing a fiddleback chasuble.

Yes, that style of chasuble was appropriate to that era.

That style chasuble is appropriate for every era, isn't it?

If guess if you don't mind wearing white socks with black shoes . . .

Ouch, Anonymous 2. Many of the old chasubles were really works of art and it's too bad they've been replaced by, in many cases, the multi-colored, abstract patterned ponchos that Bozo the Clown would think a little too crazy.

Hello,
It was nice to see the pics of
St. Adalbert's church. (Please note the spelling of the church name)
I often wondered what they did with the altar from the convent. Where in the parish is the small adoration chapel?
Is Fr. Keller really gone? His name is still on the web page as "staff".
I haven't been to the church for ages. Maybe I'll venture back if he's gone for good.
I know Fr. Gearing will be a welcome change. Good luck to him there. -a

SERIOUSLY, i'm not going to kill myself, chill. BUT lets just say I went to a private art college(SCAD)... I owe about 150,000 in student loans, the college has no JOB PLACEMENT! and I dont have a job that pays enough to keep me fed, clothed, housed, and paying a mortgage called my student loan.