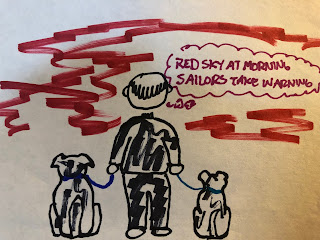 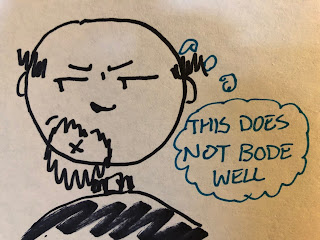 This past Sunday our choir and Holy Trinity Lutheran combined to have a Lenten Concert at St. Sebastian, "The Seven Last Words of Christ" by Theodore Bubois.  I don't have a recording of our concert but go HERE to hear an excerpt while you read the rest of this.  Go ahead and do that.  I will wait.  It is the perfect background to help you understand what happened.

Welcome back.  So things were off to a rough start Sunday.  I KNEW from the very start that something special was going to happen that day because the Devil and his minions tried to sabotage  it all day long.

It started with Mass that morning.  The boilers were working overtime on a hot day.  So I sent a text to our maintenance guy: 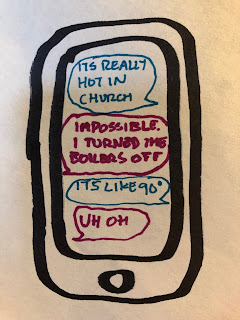 It was horribly hot - all the worse for wearing searing layers of vestments.  There were several comments in the sacristy about it feeling like "that time of life."

Unfortunately it is not as easy as just turning down a thermostat.  (Darn that!)  But our guy came in and shut down the boilers (AND THEN IT SNOWED TODAY!) and we opened up the doors and tried to cool the building down.

As we got closer to concert time and Fr. Simone and I were in the kitchen, our phones started shouting warnings at us: 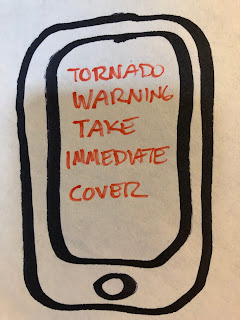 "I'm going out there and see what's going on!" I told Father.  If there was a tornado coming I was going to give it a piece of my mind!

The rain was coming down like Niagra Falls during the wet season.  Thunder cracked in the distance and dark, menacing clouds ominously rolled in.  I went in to the church to warn those setting up for the concert and they told me to mind my own business.  Nothing was stopping this concert.

Well, finally the concert got going.  All the singer and musicians were charging into the operatic depths of Christ's Passion in this piece like soldiers going to war.  It was exquisite!  Then a very kind person sidled up to me and said, "Father there is a leak in the roof!"

"ARG!  I should have know that the attack was not over!  I waited for a break in the program and did my best to sneak out a la Karen Spangler.  I needed to get to the other side of the church but I didn't want to disturb the concert so that meant going outside in my suit.  It was raging angrily outside but I venture out! 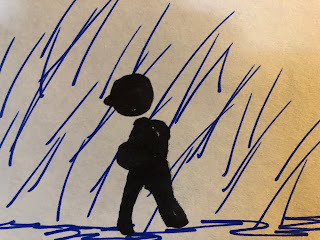 On the other side of the church I was able to access a hidden closet inside of which there is a rung ladder that rises through the building through a narrow vent.  The music was swelling as I ascended the dark passage to the storm raging above!

Throwing open the hatch I found the world in chaos!  The rain was so thick it almost felt like being under water. 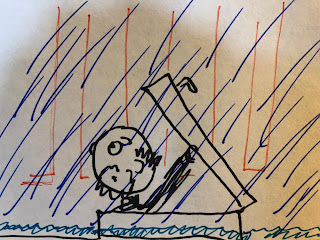 Peeking about I could see that a drain was plugged and the water levels were rising on the roof like the first hour of the Noah's Great Flood.  I ventured out, a black figure against the stained glass.  Lighting flashed!  Thunder roared!  Rain lashed out in anger!  I grabbed a handful of leaves clogging the drain and threw them against the anger of the elements while from inside the building the 70 singers charged, "He of death is guilty!  He of death is guilty!  Guilt be on us and our children!!!" 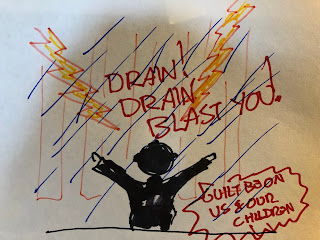 And with a mighty sucking noise, the drain began to greedily drink up the water averting sure and certain mayhem. 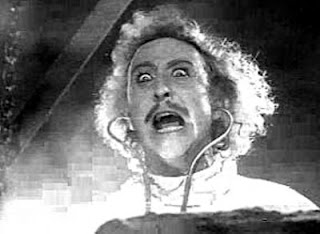 It was all rather Alfred Hitchcockian.  I made my way back, dripping and having soggy shoes.  I waited in the lobby making puddles until there was another break in the music and then stole to a seat to listen the rest of this awesome concert.  To quote one of my favorite comedic movies Soap Dish, "Finally! REAL DRAMA!"

At least we fared better than Notre Dame. I have been sick to my stomach all day.

Dear Father,
In the year 3019, they will wonder what the life of a Catholic Priest who is also a pastor was like. They assume his life was all "sunshine, lollypops and rainbows, everything that's wonderful is what I feel when we're together
Brighter than a lucky penny When you're near the rain just disappears"

A thousand years from now, the Pope will make "Adam's Ale MONDAY DIARY: ALMOST EXCRUCIATINGLY TRUE STORIES" required reading in all the seminaries of the world.

While your blog will not make you a "Father of the Church", you will be the first "Uncle of the Church." Dr. Skolops

Aha! so maybe it was YOU that was making all that racket some time during the concert? It sounded like a noisy radiator clanking on. Several of us were in the back of the church and wondered what this distracting noise was. :)