FRIDAY POTPOURRI: HISTORY OF THE RECTORY: MAKE ROOM FOR A NEW PARTNER 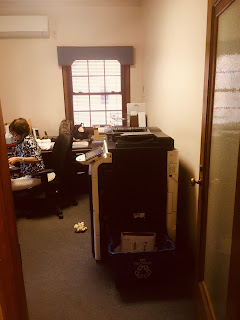 The next part of the project was that of changing the copy room into an office in order to get all of the offices off of the bedroom floor.  Thee is just something creepy and inappropriate about taking a shower and getting dressed in your bedroom while in the very next room someone is meeting with a bereft parishioner.


The first move would need to be the evicting of the copy machine out of its own office in order to free up some space.  It turns out that if the copy machine were a person it would be appreciated for its efficiency and hard work, but nobody would want to partner with him because he took up  lot of space and was smelly and noisy.  Conversely, nobody wanted to be too far away from him.  Put him in the secretary’s office?  He was too noisy and it was already too packed in there.  The basement?  Too far away and too damp.  The hallway?  Too small and there were no available outlets.  The volunteer office?  Move over and make room for your large, smelly, loud new partner.

With this space and some other creative adjustments in the house, all of the offices were moved out of the bedroom hallway.  A little ground had been claimed for house!  That would not be the end game for the little office in the front of the house.  Before things really settled there would be a few more moves but by and large the staff was amiable about their relocations.  It turns out they were uncomfortable having offices amongst the bedrooms also. 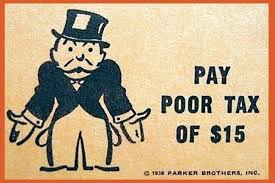 Interestingly enough, the change in status of the rooms altered our taxes.  Every square foot of the house needs to be accounted for.  Having offices turned back into living space means a slight loss of a tax break for the Church.  But hopefully the investment in sanity and appropriateness would be worth it.
Posted by Fr. V at 6:33:00 AM