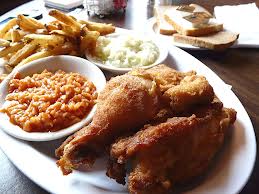 Yesterday I had a funeral for a family member and a cousin from California who did not grow up in Barberton or have the opportunity to visit very often came in for the occasion.  Afterwards we sat down for the funeral luncheon at Prince of Peace Parish were they served a traditional Barberton/Slovenian meal.  All of a sudden, in the middle of the usual rumble of conversation that typically takes place at such a meal we heard, “WHAT IS THIS?  AND WHERE HAS IT BEEN ALL MY LIFE!”  Growing up in the deserts of California this young man did not have the advantage of Slovenian sausage, Barberton chicken, and chicken house hot rice, staples in these parts.  A long conversation ensued about shipping chicken dinners all over the country with dry ice, where to go to get the best canned hot rice to take home, how family usually stops at Al’s Meat Market before heading back to their respective parts of the country so that they can enjoy such delicacies year round.  This meal was a great time to catch up, make connections, and tell stories. 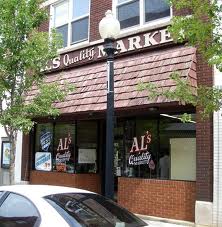 If you have a rectory of more than one priest, some of the best collaborative work gets done over dinner, or so it has been in the case of my last three assignments.  There is the danger of us all kind of going our separate ministerial ways and not keeping up too much with each other and what is going on.  And believe me talking about these things over dinner is far better than scheduling another meeting.  There are few things more annoying than making time for another meeting that nobody (except for some character in a Doonsbury cartoon that loves meetings and talking at length at them at length) wants to attend.

It was interesting therefore to hear a few priests who have incensed around the altar a few times being a little disheartened about a few of the oils-not-yet-dried priests who fail to grasp this concept.  They did not grow up with dinner.  Many things can make this complicated: divorced parents, sports, drama, music, whatever . . . dinner was something you grabbed to eat in the car on the way to the next activity (or worse yet, that one takes into the family room in order to watch T.V. while filling one’s stomach.) 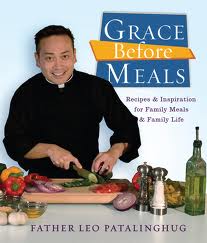 Dinner is important.  It may seem silly to insist on keeping one’s elbows off of the table or that the knife goes to the right of the plate with the serrated edge facing the plate, but if kids do not learn this at home, they probably won’t learn it and it will put them at a distinct disadvantage during important (often job related) moments of their lives.  It not only keeps the family together and informed (as painful as that can be at times) but it also teaches how to carry this forward into the future – as when they sit around the rectory dining table.

The rectory needs to be a place of dinner just as much as the family home.  Both of my previous pastors demanded it.  “This is not a hotel where you get fed on your schedule.  You will be at dinner at least X amount of time.”  We are not putting an undue burden on our children by insisting on dinner as often as feasible, we are preparing them for family, social life, and work/vocation.
Posted by Fr. V at 8:27:00 AM

Do you make Fr. P clean his plate?

Question for you Father, and for other readers:

How does your parish manage the conflict between supporting family dinner vs. faith formation and involvement in parish life?

Our parish has a limited number of classrooms and meeting rooms, and many working parents, so we end up doing religious ed on two separate nights (littles on Wed, older kids on Sun), and yes, that keeps the family from eating together a minimum twice a week. (Add in more nights if a parent wants to join the mens' or womens' group, KofC, etc.)

I'm interested to hear how other parishes solve the time/space problem so that that family can still eat together.

THAT is the ever present question! We are constantly competing even with ourselves in this regard! What are we to do? If we had more time/space/people/ resources - it would be nice to offer more opportunities for people who are in the same spot as you. I would love to hold classes between Masses - during PSR for parent while their kids are in class - during the day for seniors and others who do not/can't come at night.

We do post our classes on line however to help with this.

And dinner does not have to be every night. We chose four days. Then you have to decide how this is to be honored. We fight for it. We could easily spend those four days doing so much more - but I believe our ministry would eventally suffer.

It is not an easy problem.

Fr. V, thanks for your feedback. It's a little consoling at least to know we aren't the only parish with this problem.

I was very encouraged the other day talking to the DRE at the neighboring parish. She's putting together an all-day Saturday Advent event, which will be for kids and teens (the teens help run the event). She invited a half-day guest speaker for the adults, so they can have some good faith-formation but still grab a quiet lunch or go Christmas shopping before they pick up the kids. I thought it was a great way to encourage whole families on the faith-formation (and thanked her for doing it that way, and offered to volunteer if she needed helpers). And get everyone home in time for dinner while she's at it. I was impressed.