“Carry no money bag, no sack, no sandals, and greet no one along the way.”

These lines for last weekend’s Gospel were floating through my mind as I contemplated them for this Sunday’s homily climbing Mount Catamount last week. I was away from the parish visiting my sister in the Adirondacks in upstate New York. You may be away from the parish but there are some things you cannot leave behind – one of them being preparing what you are going to say at next weekend’s Mass. Of course I was nowhere near traveling in the way it commanded the apostles on their particular mission. I had wallet (in case I saw something on top of the mountain that I wanted to purchase,) food – lots and lots of food in case I got hungry for the couple of hours I was climbing, books and journals for a sit down with God at the top of the mountain, raincoat, sweatshirt, camera, phone – PATHETIC. 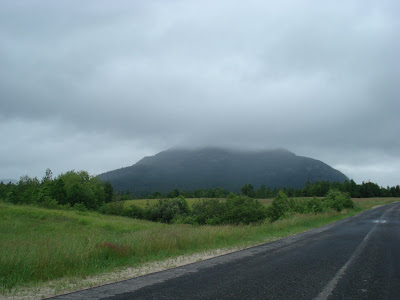 As it turned out it was cool, rainy day, the kind of day that everyone complains about except me – a true born and bred northeast Ohioan. So half way up off came the sweatshirt – the rain came – on went the raincoat. The top of the mountain was enveloped in clouds. Actually the whole area was blanketed in white cotton making the pictures I took rather uninteresting – kind of like white cows eating snow in a winter storm. 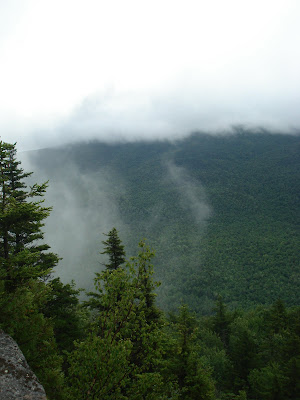 At the top I ate the fruit that I had lugged up and said some prayers remembering in particular my parish and all the people there. The Diocese of Cleveland has just completed a long and painful process of closing parishes one of the last of which was Saint Mary often talked about here. These are difficult times and it turns out that the situation is no less dire in the Adirondacks. The area is becoming smaller and greyer. After years of steady growth the children of those who moved up into the mountains are heading out to where they need not shovel snow so much. My family is no different, one nephew having moved to NC and the other in the middle of moving to FL while I was at his parent’s house. He was swimming in his pool while I was wrapped in a jacket on top of a mountain – each of us happy where we wanted to be.

All this moving has an effect on Church. In some places in Florida they cannot build churches and schools quickly enough. Near my sister’s house they are not sure they can keep the local Catholic schools open. The cost is prohibitive, there is less of a community to hit up for resources, and there are just plain fewer kids to educate. At this writing there was only one child registered for fourth grade.

As great as state schools may be it seems a poverty to have only one option (besides home schooling) for education. In a nation that stresses individuality and diversity how odd it is (to me) that we would be glad to house everyone in the same program and same education culture across the whole of the United States. It’s like entertaining our kids with T.V. Same, same, same.

I took a picture of this sign in a few towns away. Evidence of why we need good schools: 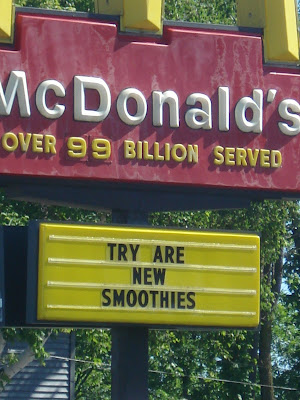 Anyway, I wanted to do some writing on the top of the mountain but the air was just too misty and the ink just blotted on the page. Just before I left two ladies joined me at the peak. As it turns one of them is a photographer. Just for fun here is her website. I think she said she had been published in Adirondack Life, a magazine for which my sister used to be circulation chief. She took my picture. In the background where you see only white on clear days there would be sweeping mountainside vistas of trees and valleys with lakes and rivers. But that is Okay with this northeast Ohioan. 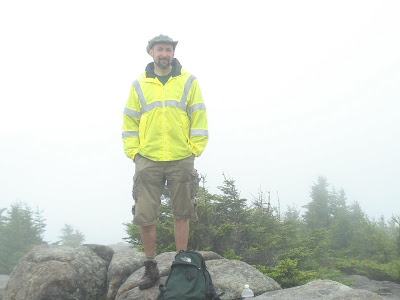 This is a great post - wonderful ruminations, link to terrific loon photos, and great memories for me of Adirondack hikes years ago. I was hiking in similar weather in NC.

BTW, I love mountains in the mist. When I lived in Winona I used to climb the bluffs and especially loved taking misty photos of the low-hanging clouds or the groundfog that was always so pretty and mysterious in that region. :-)

But yeah...it does make journaling difficult. You can get journals and pens actually made for such weather conditions at outdoor outfitters, but I don't know how well they work.

I don't think that taking along the proper paraphernalia
was pathetic. Did you hike alone? Was it strenuous?

Is one reason for the closing of churches and parish schools the fact that Catholics have not been generous in having children? We're not much better than the general population. "The Pill" entered American life in 1960, abortion in 1973. Many of those who were denied birth would now be adults with children.