MONDAY DIARY: BRIEFLY WITH THE BREVIARY

An interesting phone call came in this week. One I don’t get very often. In fact, it

has never happened before.

A man called and said that he bought a Christian prayer book and wanted instructions on how to use it. “I just want you to know that I am Protestant, but I want help in learning how to pray with this book.”

So I wondered what was in his Christian prayer book. Was it the rosary? So I asked a few questions and discovered it was the Christian Book of Prayer, a shorter version of the Breviary. These books contain the Liturgy of the Hours, the official prayer of the Catholic Church. All clergy and religious take an oath to pray this prayer daily for the sake of the Church, but in truth, all Catholics are urged to pray this prayer. We pray parts of it throughout the year as a parish and whenever I take someone on as a spiritual directee, they will learn how 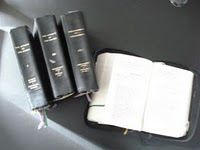 to pray this great prayer.

Bearing all of that in mind you can imagine my surprise when a Protestant called to ask for instructions. I told him it is one of those things where it was much easier to teach him how to pray it if I prayed it with him and showed him how it was done. He was quite excited at the prospect and we set a date.

“How much do you charge?” he asked.

He came and while I was setting his ribbons for him in order to find the correct psalms to pray I had to ask, “So how on earth did you come across this book?” He explained that he was looking for some deeper, meditative prayer of a type he was not finding in his local church. It is a popular mega church in the area. He found the Christian Book of Prayer on line and ordered it and now needed someone to teach him how to pray it. So we did.

You know, it is interesting to view one’s faith from the perspective of an outsider. We are used to and take so much of our faith for granted. But there is much to it that is so foreign to other people. This occurred to me for the first time when I had to explain relics to someone who was not Catholic. THAT was eye opening.

So I explained to him that I was going to show him how Catholics pray the LOTH and that he would have to adapt it to his faith tradition. It became an opportunity to see the Liturgy of the Hours through his eyes. There were clearly some things that were not going to be part of his practice such as the Sign of the Cross and the Marian Antiphon sung at the end of Night Prayer. But as I paid attention to the all many Psalms prayed in a single day, the other Scriptural passages, the music, and the constant reliance on God I was once again bolstered by this great faith of ours.

When we got to the petitions the first one was for, “Benedict our pope and Richard our bishop.”

“You probably want to skip over those huh?”

“The pope is a great man. I have no problem praying for him.”

I was a bit stunned and could only mutter, “Thank you.”

When we were done he asked if I could recommend a book on Lectio Divina. “I just happen to have a work sheet here to help you pray it. Let’s try it together with a passage from Scripture.” And we did.

Why is this man not Catholic?

I wish I could be a fly in the wall when he returns to his church and shows them what he has been praying. Will it go over well? Maybe it will direct him to the Catholic Church or simply make him a better prayer in his own church. In any event, it made me more appreciative of our prayers.
Posted by Fr. V at 7:58:00 AM

How awesome is that and unusual.
I am using Divine Office for Dodos which is helping a whole lot. She mentions other christians praying the LOTH but I have never met one. I have only met a couple of lay people that actually KNOW how to use it, correctly..

Great post. Some of our separated brothers are more separated than others.
How about posting the lectio worksheet?

Awesome. You may have planted a seed.

I am Protestant and I occasionally pray the LOTH, I have no problem with praying for the pope - or for anyone else for that matter, I've led lectio groups at my church, etc. You may not run into us every day, but here are plenty of people who have good reasons for staying within our own tradition and also for crossing "boundaries," if we must insist on viewing them that way, or for exploring and praying with the whole tradition of the church, which is how I prefer to think of it.

there is a web site entitled 'apeoplesbreviary.com' which is a version of the breviary which contains the office which priests say daily . . . . perhaps reading it might appeal to the man in question . . . . A Peoples Breviary changes daily . . . . I read it. and I recommend it . . . . my brother is the author

Fr. V ~ It would not surprise me at all if the gentleman you describe comes back to inquire about the entire 4-volume LOH! :-)

Personally, I don't know what I would do without the LOH!

It's great to know stories such as this. I tend to find in them lots of encouragement in these ever difficult times.
I have met a disabled girl who wanted to see a catholic Holy Mass even though she was in some pentacostal church. I wanted to manage it for her but her foster family didn't like her to go to my parish with me, so nothing happened and then I left Canada for my home country. But I like to think that she will decide for herself when she's old enough and I hope God will help her.

For me it's no surprise Protestants pray for our Pope, isn't it true we Catholics sometimes pray for our politicians or on some feasts specifically for the jews(here insert your own example:) )? So it shouldn't surprise us, we believe in the same Jesus Christ:)

I was glad to read Foxie's comment, because I realized that I was really troubled by your being "stunned" that a Protestant would consider the Pope a great man and pray for the him. I was troubled because I wondered whether that meant that you would find it unusual for Catholics to pray for Protestant or other religious leaders or situations.

Example: We prayed in our church one Sunday for those affected by the Cleveland Catholic church closings. I would be really surprised if anyone blinked an eye over its having been a prayer for Catholics. And I would hope the same would be the case in reverse.

In Father's defence regarding his being "stunned" that a protestant would pleasantly pray for the Pope, most media is anti-catholic and angainst the Pope. Father probably takes a lot of criticism for acting in union with the Pope. Also, many protestants are not comfortable praying with Mary and the saints. To cradle catholics praying for the Pope and the bishop is as fundamental as praying to/with/through Mary and the saints. Catholics do readily pray for all kinds of preople and situations just like other Christians. There are many misconceptions about protestants by catholics and catholics by protesants.

I learned how to pray the LOTH by following The Divine Office For Dodos by Madeline Pecora Nugent. I use the one volume which has everything except Readings.I find that an Ordo is essential; it sets out for me, day by day, what part of the LOTH to pray.