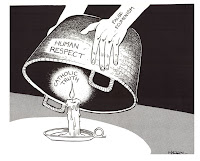 priest does every worthwhile ministry or activity that a priest “should do.” I suppose parents feel the same way when they look at the lists that experts have assembled pointing out everything that they should do so that their children don’t turn out to be deranged.

Fortunately there are some priorities that are set in stone: the Mass schedule, the liturgical calendar, the sacraments, but after that it is pretty much up to the individual priest what he is going to do with the remainder of his time from the list of things that others have called gravely important.

Perhaps one of the most neglected on many priests lists is ecumenism. This is understandable as every waking moment and of one’s day could be filled with taking care of one’s own community if you were so disposed. That does not make ecumenism unimportant, just difficult to get to.

That being said I am glad that I have been able to be in touch with some of the local religious leaders in this community though admittedly through their efforts, not so much mine. Many came to welcome me when I arrived which I found touching. One of them, a woman minister in full clerics, came from the local church that many consider the center of the AA movement stopped by to offer me advice on everything from where I might get my brakes worked on to who has the best pizza.

Recently I was able to go out to lunch with rabbi from Beth El which is located right off our property. Very kindly he called and offered to show me their space and take me out to

lunch and I accepted. He greeted me at the door and with great pride showed me their buildings and worship space. Most interesting was their banquet facilities. They keep kosher there and so not only was their one kitchen that was larger than our well proportioned kitchen but a second equally as large one next to it that allowed them to keep separate foods that should not come in contact.

Then we got down to talking nitty gritty about the challenges we each face and it reminded me of a National Geographic special we watched as a family when I was small. They were filming the goings on of a family that lived in a jungle in thatched buildings on poles who spoke and odd language and dressed in clothes with which I was not familiar. The announcer said, “We will now listen into a typical evening with this family and translate for you the heretofore unknown mysteries of this people.” Then the speaking of the people in their house was heard with translations in orange letters appearing at the bottom of the screen. The first line was the most important. “Stop picking on your sister and come over right now and eat your dinner.”

I was highly disappointed. Some mystery. But it was not far from what happened between me and the rabbi. How do you keep the faith exciting for the youth? How do you help those who want to get married understand the importance and blessings of chastity? How do you help those hurt by practices of the faith? How do you let people know that God loves them so that they believe this truth? How do scrape enough money together to pay for the boiler? It was like an old Star Trek episode where there is a parallel universe where everything is the same only not at all.

That is the kind of relationship that can develop between people of different faiths when they are comfortable enough in their own faith not feel threatened. I think it is people of weak faith that must take all points to argument and war. Perhaps it is a grace that even our buildings sit peacefully side by side: a symbol of what can be achieved between people who love God and are confident in His love for them.
Posted by Fr. V at 1:49:00 PM

Fr. V., this is a great post, and I like your observation...and I think you're dead on. People who argue about their faith DO tend to be the ones who struggle. It's like they're so terrified that it might be taken away from them that they have to hold on with all their might...as opposed to just trusting in God and letting it be a discussion instead.

Hmm...much to think about. Thanks!

"Amen! Amen!" our hearts cry;
His Word is true.
All that His Word has said,
I will do.

Side-by-side we recite the same words, yet remain in different belief systems, assured that God loves us both.

God bless America (where this can and does happen).
I love the humor and wisdom in your posts.
Shalom shalom.

One of the nicest things I discovered about pro-life work was that people of all faiths are involved.
We were once at a large gathering of Evangelicals, Catholics, Jews, Lutherans, you name it, and we felt joyful ...and maybe a little smug...that while many faiths were TALKING ecumenism, we were actually joined and working together to promote the blessed gift of human life. And it was humbling as well!

A whole world of religions shows up in the soup kitchen, too..

And at catastrophic events anywhere in the world, or at a river when a plane (or child) has fallen into it --every one of us has truly become "us," ready to jump in if need be, while creeds/colours/economic status fail entirely to register in our thought.

We aren't born with nor do we toddle around with prejudices --we learn them. Sad but true. Somewhere along the way, we must un-learn them, for indeed, all people are people like us-- precious, irreplaceable, and God's.