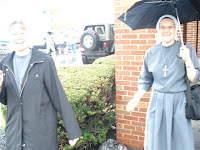 There seems to fall a habitual silence when pro-habit and anti-habit nuns meet. Each has passionate reasons for doing that which they do. Long time readers of Adam’s Ale know that I have a pension for habits and collars in a country that is increasingly symbolically and visually oriented. But non-habited nuns did not discard their striking robes without heavy reason and debate and did so hoping to bring advancement to the cause of the 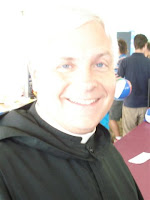 mission of the Church.
One nun states, “Though it never succeeded completely, the habit was intended to mute personality, erase individual difference, short-circuit vanity, keep the world at a distance. At the same time, it placed the Sister in a position of high symbolic visibility. "Nuns were always on stage,"’ was how one wise veteran of the era put it. "That was what the habit was for." By adopting contemporary clothing, women religious made a deliberate choice to move off that stage, into the audience so to speak, and toward individual responsibility. "Moving into modem dress had dramatic impact," former nun Mary Griffin recalled in her memoir Courage to Choose, "It 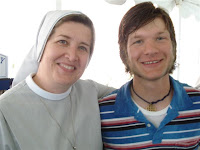 revealed to the world in general the human being underneath the habit. But more important, it revealed the nun to herself: it was an experience in recognition.”" (The rest of the article may be found here.)
I have come to realize that my desire for nuns to be habited was just that, my desire for nuns (and religious brothers) to be habited. Does it matter what I desire? No.
In the long run it will not matter if one thinks that wearing a habit is dangerous nostalgia or not wearing them makes them invisible and non-co 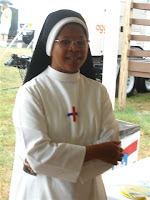 nsequential, it will be what works, what promotes the kingdom that will prevail. After all there are many organization and lay movements that meet without outward signs and their activity in the world attracts others to their gatherings. Why could it not be the same with nuns?
Yet I see the large orders of our diocese, the backbone of the burgeoning, growing ages now fading away and the young women searching for religious life not joining these once flourishing orders but choosing to leave the state i 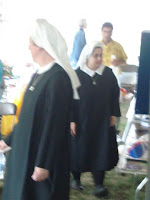 n search of something they are not finding here.
In contrast to the quote above here is an excerpt from a letter a newly habited nun of our parish wrote recently. “Taking the Holy Habit has really been such an honor, although I honestly feel much too young to have it on. But to be clothed in the white of purity, virginity, baptismal and bridal gown, wearing our weapon the Rosary at my side, covered in Our L 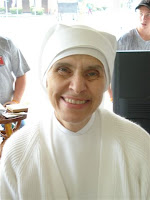 ady’s Mantle and protected by her Scapular leaves me really humbled and ecstatic at the same time. To be living witness to the world, to be a sign of hope that there is more than the temporal is a gift. I am really a reminder for myself first that there is a God who loves me intimately, who chose to create me, and is thinking me into existence at the very moment, and then for everyone else of that same reality. And finally as my response to Him is complete YES, I cover my head, to reserve myself for Him only.”
I am almost moved to tears over this statement. Coming from her I know it is authentic. But the question is which life is sustainable; which order will grow over the next 15 years, the former nun's or the latter? 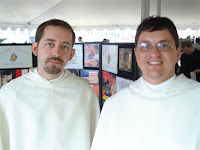 Peppered throughout this post are pictures of religious men and women. They were taken early in the day at the vocations tent at the FEST. I found myself wondering if the people at the other tables were actually religious or not and as I only had about 10 minutes between tours to take pictures, I didn’t have time to inquire. There may be a lesson here. But only time will tell.
Lastly, I do not wish to disparage any of you who are out there quietly plugging away at your vocation as a religious without a habit. We as Catholics get beat up enough without turning on each other. Thank you for your vocation. Thank you for the life you bring to the Church. Thank you for taking God's call in your life seriously enough to take vows as a religious. May God bless yo 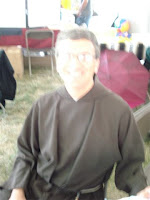 u and your mission.
Once again, here is the new site for religous vocations in the Diocese of Cleveland.
Posted by Fr. V at 8:57:00 AM

Fr. V, my favorite person was in the vocations tent and yet I see no picture of him ;)

Fr. V. ~ While the habit is not necessarily a sign of faithfulness (there are habited communities that are not faithful, and there are habitless communities that have remained faithful), there is a strong correlation between the habit and remaining faithful. (sorry about the redundant usage of the same word.) While I was discerning, I went to several web sites of various communities, and what was glaringly obvious was that the vast majority of the orders that had chosen to walk away from the habit also walked away from the Church. It was actually very depressing.

I do know some Sisters who work at my parish, and they are identified only with a pin or a necklace - I'm actually not completely sure. But we know who they are if we've been around long enough. I do not question their committment to God or the parish or the Church. But based on some things some of them have said, I do question their theology.

Since I can only speak to women's communities, most women today are looking for authentic Catholicism, and we haven't been able to find it in communities that don't wear a habit. We haven't found "the whole package" in those that have been "modernized". Certainly they do great work for the Church, and we even have a local black-eye community whose founder is rolling in her grave, and even they do some wonderful things for the community and the Church. But they aren't attracting vocations because when it comes to giving one's life up for Christ or giving one's life up for the current political agenda...well, that's nothing but a big question mark. So they don't get a lot of vocations, nor do communities like them.

I think what happened is some of them went too heavy on "Social Justice" and threw everything else out.

No, they don't have to wear habits to be faithful; but the habit certainly is a sign of what is happening internally (within the community).

No argument from me Adoro. I agree with you. The reason for the post was two fold: in general I think you are right but I also think that there are some people whose orders became unhabited and they are still good and loyal people - without a choice - and I wanted them to know that that is recognized. And it is not that I think what they are doing is wrong simply by dint of them not having a habit or that in an ideal world their philosophy is sinful - it simply just does not work.

The second is connected and EXACTLY what you said - if people are looking for authentic Catholicism and that happens to be not only in a solid community but also a habited one, that is the one that will survive and what we WANT to happen matters little (though I think what I want to happen is what will win out. Time and numbers will tell.) It is a case for survival of the fittest - or habitest.

If one looks only at the photos in this post, one really needs add nothing. I generally don't let that stop me from commenting, lol, tho' in truth, I long for the day when we won't have to communicate with such slippery slopes as words.

What I also see, beyond peace and joy and commitment, is muted gender attributes. Isn't that what those who are consecrated to God want? That no one else look upon them as couple-able? Of course, I'm lingering dangerously near the slippery slope of words regarding celibacy, and not all the priesthood is celibate. So I'll veer back: Who invented the habit? Was it not Mary, who wove for Jesus, the garment in one piece that He wore. Is that not the same linen we don for the sacraments of Baptism and First Communion; is it not the same linens that drape our altars.. and also, one day, our coffin? We go from linen to linen. I would not trade a holy habit for clothes of the world.

And if those who work hard to be "clothed" with a tiny scrap of brown felt, or a tiny Tau (a tiny habit that isn't seen--the hiddenness being of a voluntary poverty but sometimes also of an INvoluntary poverty for Love) were given the option, would they wear a full habit? I think most would. Don't you?