I want to apologize to everyone right now. I just spent the weekend with our youth at a youth conference down at the Franciscan University of Steubenville and I find myself suddenly using the word “awesome” a bit too much. 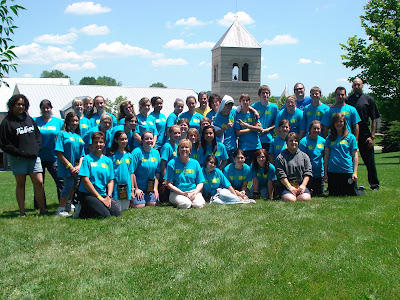 It was another one of those guilty pleasures of being a priest. The keys to the parish (and all the parish work) were handed over to the new parochial vicar and the ever vigilant deacon I was afforded the time to spend three days with younger members of our parish on retreat.

Because we are in Cleveland the youth retreats there are fairly well known. But in case you are not so familiar, the university puts on, among other retreats, four high school retreats that are deeply Catholic, orthodox, and charismatic. If you are a youth leader, besides those points, another great one is that it is EXTREMELY well organized. We were never without a clue as to where we were to be or having someone nearby to answer questions. It was – well - awesome, but not nearly as awesome as being with about 1,500 youth (one of the smaller conferences) that are absolutely on fire for the faith. Even those who came along with a cautious heart were, by the end, proud of their love for Christ, the Eucharist, the faith – boldly professing it and praying and cheering for this great gift of Jesus to us. 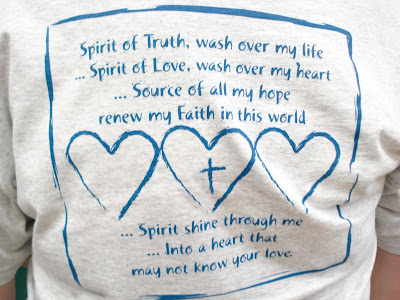 Over the few days we heard hundreds of confessions (my brain was mush by the end of the day), were moved by great speakers, and had lots of LOUD and ruckus – but VERY Catholic – music. I will admit to you that after two days of the loudness and hearing numerous confessions I had reached my limit and needed some quiet time away. The conference on Saturday night was about half way through and they were preparing for adoration in the evening and I quietly slipped out – feeling a bit poorly for doing so – but needing to none-the-less. I bought a snack out of a machine and lay down on a bench outside looking up at the sky and processing everything that had been happening as it was quite intense when I noticed the clouds were tinged in bright orange. I climbed up a hill not far from where the conference was taking place and saw a beautiful sunset. I could hear the music revving up and looked at my watch and figured that adoration was beginning when I saw the cloud below right over the building. Fortunately I was carrying my camera with me the whole weekend and was able to capture it. 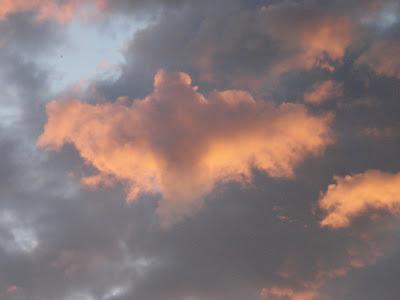 Now, I don’t place a value on it. I know it seemed pretty cool to me (for reasons I won’t mention - you may draw your own conclusion or just think that it’s a bunch of pretty clouds at sunset) but it was as if this is why I was drawn outdoors and then back in to join the group.

Inside there was a Eucharistic procession going on. Can you imagine what it is like seeing all those young people who we are told do not believe in the Eucharist anymore – who don’t get it – who we are told think the adoration too old school – who we are told would never go to adoration because it is not relevant (how can the Eucharist not be relevant? . . .another post) kneeling! Singing! Reaching out to Jesus! Worshipping! Crying! Giving thanks and praise to Him! I tell you – Catholicism is awesome and still attractive when presented boldly, fully, and well. 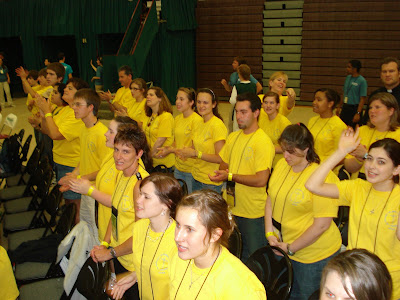 But wait – there’s more! At the end of conference they had an altar call for those considering religious or priestly vocations. Scores of high school students came forward. They were willing to say, “I am willing to consider it.” The funny part was that the priest was beginning a talk about how hard it may to come forward but if there were some brave souls that would consider being the first. But even before he began the sentence both men and women jumped out of their seats and marched forward. The priest sitting next to me in the sanctuary leaned over and said, “They’re already coming forward! He doesn’t even need to prod them!”

Oh yes – there is more. But this is already dangerously close to becoming a two or three parter and Wednesday and Thursday is already a long running series so I will end here with this one last parting statement. 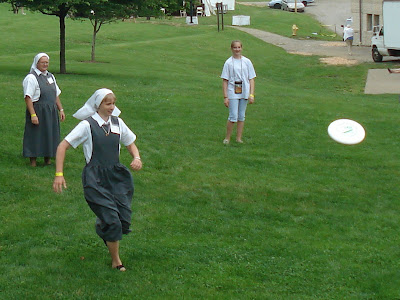 Yep. Made of awesome.

What a fitting post for a Corpus Christi sunday!

I felt this way after attending WYD2002. The Church is young, and she is awesome! (If I can loosely paraphrase JP2.)

The Holy Spirit is SO present at Franciscan and works in so many young people at the youth conferences. The dove in the clouds is amazing! (At least that's what I see in it)

Glad you had an awesome time! :)

Love the Holy Spirit in the clouds picture!

It's a dove!
How special and wonderful.

Father, I'm so glad you attended the conference and was sincerely hoping that you would be edified and refreshed. Now the question: how do we strengthen the faith in our young people back home, especially those who did not attend? Next question: why were these youth so on fire with love for our Lord? Was the faith instilled by their parents? Their school? Their peers? Their youth group? In other words, who did what in order to bring them to such fervor even before they got there?

P.S. "Awesome" photo. The Lord does promise us "signs in the sky."

I'd like to hear as much as you care to write about this retreat weekend--your impressions, insights and observations. Please speak about it in your homilies too. Thanks

I was crying for joy when I read this article.

Anon, I was crying too and I had a kid there in the group with Father V!

Thank you for writing about this (and for giving all of your time this weekend!) I've talked to my son about the weekend. I know it was awesome, cool, excellent, fun etc... but he never really tells me what happened!! He did say that you had to work pretty hard though with all the confessions and masses!

It seems from what I've heard from the kids that lots of seeds were planted, and other young plants received nurturing. I'm so glad St. Sebastians is finally on board with this!

Great picture of the clouds. Definiely looks like the Holy Spirit to me too.
I've heard great things about Franciscan and this post just confirms it. I'll have to suggest that our youth group attends a retreat.

I am so glad that you had an opportunity to experience the FUS Youth Conference. As a Franciscan graduate and former attendee of past conferences, I can tell your readers this: Franciscan University is an amazingly, authentic Catholic University. In response to one of the earlier posts I would like to point out that many of the kids at these conferences are searching for the TRUTH. Some attend the conferences because they are grounded in their faith, others are unsure, but the point is that they are searching for the presence of God in a world that too often shuns him. For many attendees it is the first time they have experienced other young people who are authentically Catholic. For many attendees this is the begining of their conversion experience, but it can't end when they arrive home. We must continue to fan the flame that was lit over such a wonderful weekend and enable the youth to continue to discover the beauty of Catholicism.

Awesome indeed! The cloud photo is very significant - what a grace.

I just got back from Steubenville this weekend, this was my fifth year going with my youth group...

I have had a really interesting story, and had some AWSOME events happen to me, if you'd like to hear more I would love to share...

I am just not sure I'm ready to publish it on an online blog... I'd love to get in touch and hear about anymore experiences you had as well.

-Matt from Cleveland (St. Mary of the Assumption Parish in Mentor)

PS: you can get in touch with me through e-mail.